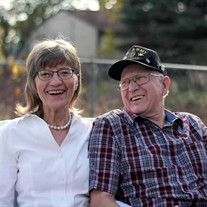 Garland Charles Draper was a wonderful Christian man, beloved daddy, cherished grandpa, and loving husband. He passed away peacefully at his home in Williamsburg, Michigan on April 13, 2022. Garland was born on August 25, 1932, in Taymouth, Michigan. Garland Draper started working for Buick Motor Division, Flint, MI UAW Local 599 as a machine set up man, and was paid on multiple suggestions before retiring in January of 1981. When he began working, he was drafted into the army, serving there for two years before returning and finishing his 30-year career at Buick. He married his wife Rita Decker Draper on November 17, 1956. Around 1972, during the time he was working in Buick, Garland Draper worked weekends and evenings after work with his family, building a home in two years, complete with four bedrooms and a full basement. Garland attended the Bristol Rd. School of Biblical Studies for three years, graduating in 1984. He became an Elder of the Center Road Church of Christ in Saginaw, Michigan for several years, as well as the Caro Church of Christ in Caro, Michigan, while also being a part-time minister. Garland was a volunteer delivering Meals on Wheels to people in need and was honored as Volunteer of the Year by the State of Michigan. In his later years, he found joy in creating wooden toys and displaying them at craft shows with Rita and his daughter Cherie Lepeak for many years. During the 1980s, Garland owned and operated his business, Rita’s Woodworks, making furniture for three years. He was always a kind man; he never met a stranger. He was a great storyteller, and loved to joke around with everyone. This was the kind of man Garland Draper was; a family-oriented man who strived to honor and love his family, all the way up until his final moments. Garland Draper was preceded in death by his mother and father William and Mildred Draper, along with his siblings Betty Ewing, Kathleen Gean, Josephine Rummel, Darrel Draper and great grandson Liam Charles Kelly. His surviving family members are his brother Bill Draper from New Braunfels, Texas, and his wife Rita Decker Draper, along with his three daughters and their families; Cherie and Steve Lepeak in Port Austin, Michigan, Gwen and Dan Schnell from Owasso, Oklahoma, and Kellie and Anthony Makinson, from Williamsburg, Michigan. Garland Draper had eight grandchildren and 16 great-grandchildren, all of whom he loved to the depths of his heart. The funeral service will take place Tuesday, April 19, 2022 at 2:00 PM at Kalkaska Funeral Home. Burial will take place at 1:00 PM at Great Lakes National Cemetery in Holly, Michigan on Wednesday, April 20, 2022. The family will receive friends beginning at noon until the time of service. Arrangements have been entrusted to Kalkaska Funeral Home. To view the live service please click on this link. The link will be active beginning at 1:30PM. https://www.youtube.com/watch?v=MJ_0-Gi9hJc

Garland Charles Draper was a wonderful Christian man, beloved daddy, cherished grandpa, and loving husband. He passed away peacefully at his home in Williamsburg, Michigan on April 13, 2022. Garland was born on August 25, 1932, in Taymouth,... View Obituary & Service Information

The family of Garland C. Draper created this Life Tributes page to make it easy to share your memories.

Send flowers to the Draper family.