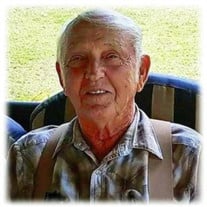 Floyd Arden Jenkins, 86, of Kalkaska, passed peacefully into the arms of his Lord and Savior Jesus on Sunday, February 21st, 2021, with his loving family at his side. Floyd was born on January 23rd, 1935 to J. Fay Jenkins and Gladys (Inman) Jenkins, in Kalkaska, Michigan at the home he was currently living in. Floyd was more fondly known to many as Ardie. Ardie grew up on the farm and loved being a farmer. In high school he met and became high school sweethearts with Margie Smith who, as a little girl, dreamed of marrying a red-headed farmer. They later married on August 15th, 1954, and together with a lot of hard work, they successfully built their dream of being farmers and raising their family in a loving Christian home. Ardie told Margie and many others over the years that he would marry her again. They were always together, rarely doing anything without the other. After they retired, they spent their winters in Lakeland Florida and loved to have family and friends come down to stay. They enjoyed sharing with them all the places they found fun. Their love story lasted for 66 beautiful, earthly years. If only all marriages could be like theirs! Ardie was also a loving and devoted Dad and Grandpa. He showed his children and grandchildren the importance of hard work. He was up very early in the morning to start his day and didn't stop until late at night; and many nights was up several times to check on the irrigation that watered his crops. He made sure his children went to church and learned the importance of knowing and loving Jesus Christ. He showed his children and grandchildren how to appreciate what you have, to take care of what you have, how to be humble, and to stand up for what you believe. Children who came into his home over the years were treated like one of his own. He loved to rock his grandchildren for hours and would share his love for Jesus with them. He was always happy to have his grandchildren spend the nights and weekends with him and Grandma and taking them to church. Ardie was an active member of the Kalkaska Church of Christ. His willingness to share with everyone his love for and faith in Jesus Christ was great. He wanted to make sure that everyone he met knew the importance of knowing Jesus and accepting him as their lord and savior. Verses he shared the most were Acts 2:38, “Repent and be baptized every one of you in the name of Jesus Christ for the forgiveness of your sins, and you will receive the gift of the Holy Spirit”, and Ephesians 4:32, “And be ye kind one to another, tenderhearted, forgiving one another, even as God for Christ sake hath forgiven you.” His love, strength, wisdom, generosity, guidance, willingness to help others, and his love for his Savior will be missed by those who were blessed to have known him. Ardie is survived by his daughter Cynthia (Terry) Arsnoe, son Shane Jenkins and daughter Julie (Scott) Park. His brother Bruce (Joann) Jenkins, brother Lynn (Sue) Jenkins and sister Sherry (Chuck) Parker. His grandchildren, Ryan (Shelly) Arsnoe, Angela (Joe) Gaylord, Troy (Ann) Jenkins, Adam (Samantha) Jenkins, Nicholas (Lindsay) Arsnoe, fourteen great-grandchildren and 4 great-great-grandchildren and several nephews and nieces. Ardie was preceded in death by his wife Margie Ellen Jenkins, parents J. Fay and Gladys (Inman) Jenkins, brother Larry Jenkins, sister Bonnie Hall, several aunts and uncles, and grandson Zachary Douglas Jenkins. Visitation is at Kalkaska Church of Christ on Wednesday, February 24th from 4:00pm-7:00pm. If you would like to make a donation in Ardie's memory, checks can be made to Kalkaska Church of Christ. A celebration of life will be held in the Spring/Summer. Arrangements have been entrusted to Kalkaska Funeral Home and Cremation Services.

Floyd Arden Jenkins, 86, of Kalkaska, passed peacefully into the arms of his Lord and Savior Jesus on Sunday, February 21st, 2021, with his loving family at his side. Floyd was born on January 23rd, 1935 to J. Fay Jenkins and Gladys (Inman)... View Obituary & Service Information

The family of Floyd "Ardie" Arden Jenkins created this Life Tributes page to make it easy to share your memories.

Send flowers to the Jenkins family.