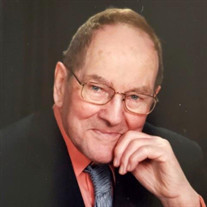 Edmund “Bruce” Crawford went home to his heavenly father Wednesday, October 6, 2021. He was born to Edmund and Frances Alice Crawford on August 3, 1932, in Ironwood, MI. Bruce attended Bob Jones University and Grand Rapids Baptist College and Seminary where he met his wife Ruth Marie Gary. They were married on June 26, 1953, in Bay City, MI. Bruce dedicated his life serving God as a minister in Hillman, Saginaw, Caseville, and Fife Lake. He also worked as a mechanic and body shop technician, later purchasing the Kalkaska Shell Station which he owned until 1985. During this time he also ran a wrecker service and worked as an EMT/ambulance driver. After the gas station, Bruce worked as a salesman for Northern Michigan Spring where he fined-tuned his gift of gab. Bruce will always be remembered for his willingness to help others, never turning away anyone in need. He will also be remembered for his expertise in everything automobile-related, especially his beloved Nash. The most important thing in his life was his family and his devotion to Jesus Christ. Bruce is survived by his daughters Elaine Johnson, Lynda Powell, Gwen Allen (Dustin Sconyers) and son-in-law Dave Hannon; grandchildren Christina (Ted) Henderson, Dave (Lauren) Hannon, Ron (Kate) Howell, Jenny Russell, Kayla (Roger) Williams, Elizabeth (Mike) LaDouceur and Duane (Kristy) Allen, 17 great-grandchildren; sister-in-law Gwen Crawford and many nieces and nephews. Bruce was preceded in death by his wife, daughter Denise Hannon, sons-in-law David Tate and Ken Allen, and great-granddaughter Esther Hannon. Visitation will take place Tuesday, October 12 from 5-8 pm and a final visitation will be Wednesday, October 13, 10-11 am at Kalkaska Funeral Home. The funeral will be officiated by Pastor Matt Moser on Wednesday, October 13 at 11 am at Kalkaska Funeral Home with a graveside service to follow at Evergreen Cemetery. Arrangements have been entrusted to Kalkaska Funeral Home and Cremation Services.

The family of Edmund "Bruce" Crawford created this Life Tributes page to make it easy to share your memories.

Send flowers to the Crawford family.