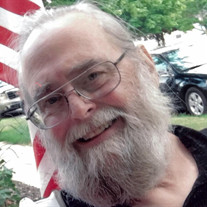 Douglas “Doug” John Scobey, age 68, of Kalkaska passed away peacefully on Friday morning at home with his loving family, October 28, 2016. He fought cancer for over a year and surpassed many statistics. He looked at each day as a blessing and taught us that we all only have today, yesterday is gone and tomorrow is but a dream. Enjoy today and make the best of it! Doug was born in Hastings, Michigan on December 1, 1947, the youngest son of Jonathan and Lenora (Powell) Scobey. He was a unique individual and shared his opinions freely with his friends and family, you always knew where you stood with him, he also has a knack for making you think and to push yourself beyond your own expectations, and Doug lived vicariously thru Mary. Doug held many jobs after high school, some of which were: moving company, foundry, drafted in the Army and served in Vietnam. Once home from the Army, he worked for the post office, oilfield, cook, butler, mechanic, carpentry, chef for Knife and Fork Club in Traverse City to name a few. Doug was never afraid to take on a new task and chose to take each new day as an opportunity and do his best! One of his favorite sayings was do your best every day, tomorrow may be different and you might do it differently the next time, but to ALWAYS DO YOUR BEST! Doug is survived by his wife, Mary (Sabins) Scobey, of Kalkaska, son Douglas, son Jonathan, daughter Jacqueline, son Jeremy, son Joshua (Marie) Scobey, of Daniel, Wyoming, daughters Christal (Scobey) Czaplicki of Kalkaska and Jennifer Scobey of Fife Lake; five grandchildren, Marshall and Madison of Kalkaska, Garett and Gage of Daniel, and Logan of Fife Lake. One sister, Phyllis Anderson of Hastings, Michigan and one brother Phillip (Vicki) Scobey of Middleville, Michigan. Mother in law Margaret (DeWitte) Sabins of Traverse City, Brother in law Joe (deceased) (Astrid) Sabins of Nittendorff, Germany, Brother in law Ken (Jan) Sabins of Fruitport, Michigan, Dan (Kathy Smith (deceased)) Sabins of Kalkaska, Michigan and Jeff (Collette) Sabins of Fife Lake, Michigan and many nieces and nephews and cousins. He was preceded in death by his parents, Jonathan and Lenora Scobey, infant twin siblings, maternal and paternal grandparents, father in law Robert Sabins, brother in law Pete Anderson, brother in law Joseph Sabins, sister in law Kathy Smith and many Aunts, Uncles, nieces, nephews and cousins. Visitation will be November 2, 2016 at the Kalkaska Funeral Home from 2-8pm. The funeral mass will be on November 3, 2016 at 11am, at Christ the King Catholic Church in Acme, luncheon to follow at Christ the King Family Center. Contributions may be made in Doug’s honor to Mary Scobey c/o Kalkaska Funeral Home, PO Box 1457, Kalkaska, MI 49646. Arrangements entrusted to Kalkaska Funeral Home and Cremation Services.

Douglas &#8220;Doug&#8221; John Scobey, age 68, of Kalkaska passed away peacefully on Friday morning at home with his loving family, October 28, 2016. He fought cancer for over a year and surpassed many statistics. He looked at each day as... View Obituary & Service Information

The family of Douglas John Scobey created this Life Tributes page to make it easy to share your memories.

Send flowers to the Scobey family.