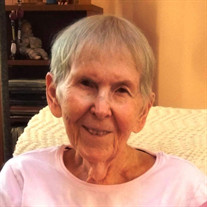 Donna Marie Ingersoll Johnson Sears arrived in this world February 10, 1927 in her grandma’s bed on the family farm north of Lake City, Mich. in the middle of a snowstorm. She was the only child of Jack and Lita (nee Lamb) Ingersoll. Her spirit lifted peacefully on February 8, 2021 with both of her children by her side, two days shy of her 94th birthday. Donna’s childhood was happy as an only child. Her father taught in one room schoolhouses and lumber camps, so there were frequent moves from small town to small town. She graduated from Lake City High School, and went on to earn a Bachelor's Degree in Art at Central Michigan University. She later went back, along with her father, both earning their teaching certificates and graduating together. Donna began teaching kindergarten in Williamston, Mich. in the late 1940s, where she met and married Charles Edward Johnson. She continued to teach until her first child was born. She stayed home to raise her children, Lee Ann, Scott, and Brad, returning to work in the Williamston Middle School when Brad started kindergarten. She spent the rest of her working career inspiring children in their love of reading, from working as a librarian to teaching 6th grade. She made the written word come alive. While at home, Donna wrote a weekly newspaper column, “The Little Woman,” filled with stories about raising her children and life in the 50’s and 60’s. Donna was widowed at 54, and continued to teach in the Middle School until she retired. She then began her next adventure, marrying long-time family friend Al Sears, and relocating to Mesa, Ariz. Together they designed their new home, built overlooking the Arizona desert with Phoenix lights in the distance and the Superstition Mountains hugging them. The home included a designated clay studio, where she spent hundreds of happy hours sculpting. She loved to share her creations, often trading her works with other artists, as well as selling many. Her most memorable sale was a clay piece that went to a member of the Kingston Trio. She truly came into her own, and was proud of the title of “Artist.” Donna and Al had twenty wonderful years together in the desert, traveling in their motorhome, christened “The Geezer,” and boating on Lake Powell. They loved exploring the country, finding unique art and antique shops, historical buildings and Indigenous structures. Summers they would drive the Geezer to the family cottage in Lake City, Mich. to spend time with family and friends. The highlights were always “The Greatest 4th In The North,” and the Lamb Family Reunion. She was proud of being the matriarch of the flock. Following Al’s death, Donna moved back to Michigan and joined her daughter, Lee, in Kalkaska. Her creativity took flight in a rekindled direction, again writing a column, “The Little Old Woman” for the local paper. Her humorous musings on the challenges of aging connected her with people from around the area and across the nation. She developed valued relationships with many who wrote to her, being touched by one or more of her columns. These friendships were a source of joy during a time when actual travel was becoming a challenge, and all her correspondence happily filled her days. Donna is survived by her children, Lee Ann Hill and Scott (Karen) Johnson; grandchildren Lance (Chelsea Lynn) Hill, Chelsea Marie Hill, and Kate (Nathan) Johnson Lozon; and great-grandchildren Leland Hill and Eleanor Lozon, with another Lozon expected in June. She is also survived by step-children Mari Jean (Gordy) Ellis, Shannon (Len) Hammond, Patti (Dave) Ulrich and Rick (Colleen) Sears; step-grandchildren in Arizona and Michigan, Michelle Sehl and great-grandson Jack Sehl, Troy Hill and great-granddaughter Lexia (Chandler) Shazri in Michigan. Donna was preceded in death by her husbands Chuck Johnson and Al Sears; and son Brad (BJ) Johnson. If you would like to express sympathy through a gift, instead of flowers, Donna would be tickled if you made a contribution to the Kalkaska Friends of the Library Building Fund in her honor. Arrangements have been entrusted to Kalkaska Funeral and Cremation Services. No service is planned per Donna’s wishes. The family would like hearing your thoughts, memories and stories about Donna. They can be shared at https://www.kalkaskafuneralhome.com/obituaries/Donna-Sears-3/

Donna Marie Ingersoll Johnson Sears arrived in this world February 10, 1927 in her grandma&#8217;s bed on the family farm north of Lake City, Mich. in the middle of a snowstorm. She was the only child of Jack and Lita (nee Lamb) Ingersoll. Her... View Obituary & Service Information

The family of Donna M. Sears created this Life Tributes page to make it easy to share your memories.

Send flowers to the Sears family.