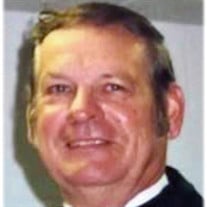 Donald Peplinski, 84, of Maple City, MI passed away peacefully on August 19, 2020 at his home surrounded by his family. He was born on May 27, 1936 on the family farm to the late Alexander and Selma (Popa) Peplinski. Donald is survived by his wife of 56 years, and best friend, Marion Peplinski, and his five children; Todd (Richard) Peplinski of Bloomfield Hills, MI, Roger Peplinski of Traverse City, MI, Lyle Peplinski of El Paso, TX, Marnie (Nicholas) Williams of Midland, MI and Darick (Carmen) Peplinski of Lake Ann, MI, along with his eight grandchildren; Jordan, Jared, Savannah, Jayden, Tiffany, Taryn, Elodia and Isabelle. He is also survived by his sisters Delores (Bill) Eisner of Traverse City, MI and Donna (Al) Williams of Miami, FL and preceded in death by his brother Alex Peplinski. One of four siblings, Donald graduated Maple City High School in 1955. Donald married Marion Newmarch on July 25, 1964 and created a home for their family of five children on the centennial homestead in Kasson Township. The farm boasted cattle, horses, swine, chicken, geese and the random occasional sheep. Donald worked as a loader operator for Peninsula Asphalt Corporation and left his stamp on many of the highways and roads in Michigan including the Sleeping Bear Pierce Stocking Scenic Drive. He was a proud member of the Operating Engineers and International Brotherhood of Teamsters Unions retiring after twenty-five years of service. An active member of the St. Rita/St. Joseph Catholic Church’s Men’s Club, he could be found working polka dances to raise monies for the church and hall. He was an avid polka dancer and celebrated the music at the annual Cedar Polka Festival, among others, and befriending the many band leaders and bands that traveled the area performing his favorite music. Deer hunting was a tradition he enjoyed and helped create lifelong friendships. He enjoyed snowmobiling in the winter where he welcomed family and friends to the farm and guided them in and around the trails of Leelanau, Benzie and Grand Traverse counties. Donald’s legacy of hard work and personal integrity was passed onto his children and grandchildren through their involvement in the daily upkeep of the family farm and care of animals, participation in the local 4-H clubs and his example of personal dedication to family and friends. His true passion remained farming and enjoying the rewards of his hard work both in the field and with the farm animals. He would become regarded as a “animal whisperer” within the family. His most relaxing moments were spent at Lime Lake…enjoying the quite times of the sparkling lake in the late afternoon and celebrating special moments marking family occasions there. A funeral mass will be held at St. Rita/St. Joseph Catholic Church in Maple City, MI on Friday, August 28, 2020 with visitation from 10:00am-11:00am and mass celebrated at 11:00am. Covid19 restrictions apply with facial masks and social distancing required. A Celebration of Life event will be planned for a future date. Memorial contributions in memory of Donald may be directed to Hospice of Michigan at www.hom.org. The family is being served by Kalkaska Funeral Home and Cremation Services. To visit Donald’s tribute page and share a memory with his family please visit www.kalkaskafuneralhome.com. A very special thank you to the dedicated professionals of Munson Medical Center and the Emergency Department along with the caring team of Hospice of Michigan. Their care and comfort have been immeasurable during this time and the family is very grateful for their assistance.

Donald Peplinski, 84, of Maple City, MI passed away peacefully on August 19, 2020 at his home surrounded by his family. He was born on May 27, 1936 on the family farm to the late Alexander and Selma (Popa) Peplinski. Donald is survived by his... View Obituary & Service Information

The family of Donald Peplinski created this Life Tributes page to make it easy to share your memories.

Send flowers to the Peplinski family.