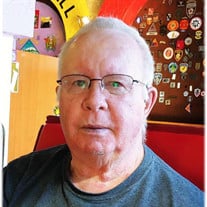 Daniel Vern Potter, 75, of Fife Lake, MI passed away November 2nd, 2021 at Memorial Central Hospital of a heart attack. Dan was born in Lansing on February 12th, 1946 to Aubory M. and Wenona M. (Symonds) Potter. Daniel served in both the US Navy and Army National Guard and worked as a Mechanic for over 45 years. Many will remember his fun and jovial personality along with his charitable heart. He was always there to help folks in need, even if it was outside his wheelhouse. His compassion and overall accommodating personality helped a lot of people over the years. He will be missed by many. During his time in the Navy, Engine-man 2 Daniel V. Potter served on the USS Iwo Jima and as part of the US Naval Inshore War Group 1 in Vietnam on the River Patrol Boats. He served two tours in Vietnam. He earned the National Defense Ribbon with Bronze Service Star, Armed Forces Expeditionary Medal “Vietnam”, Navy Achievement Medal with Combat Valor, and the Good Conduct Medal. Upon the end of his Naval Service, he joined the Army National Guard. During his time in the National Guard, Sergeant Daniel V. Potter earned the Army Service Ribbon, the Army Reserve Component Achievement Medal, Army Achievement Medal, and the Michigan National Guard Medal. He served a total of just under 22 years in military service. He is survived by his mother, Wenona Cummer, children; Jerome & Sue Northrup, Bucky Gibbs, Sandra Hendershott, Teletha & Carl Summers, and Charlene & Edward Calvosa and his siblings Vivian Engle, Thomas & Cindy Chapman, April Kelley, Colleen “Jeanne” Gutierrez & Dan Peck, Lewis & Janet Potter, and Catherine & Cliff Stone. He was preceded by his wife Patricia L. Potter, his father, Aubory, his brother Lawrence Potter, his sister Judith Hansen, and his brother Arthur Potter. A funeral service for Daniel will be held on Friday November 12, 2021 at 11:00 AM at the Kalkaska Funeral Home with final visitation beginning at 10:00 AM. Please visit Dan’s tribute page at kalkaskafuneralhome.com and share a memory with his family.

Daniel Vern Potter, 75, of Fife Lake, MI passed away November 2nd, 2021 at Memorial Central Hospital of a heart attack. Dan was born in Lansing on February 12th, 1946 to Aubory M. and Wenona M. (Symonds) Potter. Daniel served in both the US... View Obituary & Service Information

The family of Daniel Vern Potter created this Life Tributes page to make it easy to share your memories.

Send flowers to the Potter family.