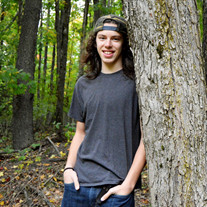 Damen James Huffman, 17, a loved Son, Grandson, Brother, friend, and resident of Kalkaska unexpectedly passed away Tuesday, December 27th. Damen was born on October 22, 1999 in Traverse City to his loving Mother and Father, Angie Potter and Dave Huffman. He had a bright, amazing and, as described by his friends, a little goofy, smile. That smile touched and brightened so many people’s lives. Damen and his mother Angie had the kind of loving and trusting bond that any parent could wish to have with their child. They would go to one another to discuss anything, knowing there would be no judgment, just love. Damen and his father Dave spent as much time outdoors as possible; hunting, fishing, snowmobiling, or just beating on the old, lifted, black Chevy pickup truck. Their love knew no bounds, especially sitting on top of 38 inch mud-tires. Damen shared an immeasurable amount of love and memories with his family and friends. As of March 13, 2015 Damen had the privilege of sharing his life and love with a wonderful girl, Alexis Hailey Hood. The two kindled a love that anyone could envy. Damen knew what they had was special. Damen was preceded in death by his Great Grand Parents, Nina and Peter Sheffer. Those who remain to celebrate his life were fortunate enough to be touched by his glow. Some of Damen’s closest include: father David (Mikki) Huffman, mother Angie (Chet) Potter, grandmother Debbie Hilton, brother Shane (Briana) Hansel, sisters Deven Huffman and Autumn Potter, his loving girlfriend Alexis Hailey Hood, his friends and their families, who considered Damen as one of their own are: Lucas, Jon, Jaylen, Brad, Tim, Pickles, Brandon, Garrett, and so very many more, you know who you are. His hobbies included hunting, fishing, hiking, mushrooming, mudding, drifting, working on cars and just hanging out with his friends. . Visitation will be on Monday, January 2, 2017 from 2-4pm and 6-8pm at Kalkaska Funeral Home. The funeral service will be held at 11:00am Tuesday, January 3, 2017, with final visitation beginning at 10am also at the funeral home. Damen’s life cannot be measured in time, but in the quality and happiness that he found, the smile he wore is proof. Damen will continue to influence each and every person that he came into contact with. His bliss was contagious, whenever you are in doubt remember Damen’s genuine smile. Arrangements have been entrusted to Kalkaska Funeral Home and Cremation Services.

The family of Damen James Huffman created this Life Tributes page to make it easy to share your memories.

Send flowers to the Huffman family.