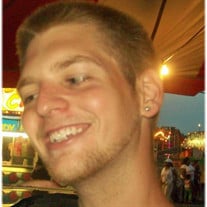 Cody Douglas Downey left this Earth far too soon on January 3, 2022. He was born July 17 th , 1990, in Traverse City, Michigan to John Downey and Melanie Maylone. Cody grew up in Traverse City, Fife Lake, and Interlochen, surrounded by family, including his eight younger siblings. In addition to his caring family, Cody had many close friendships growing up, and always managed to entertain those around him with his quick wit and intriguing personality. After marriage and children became a part of his life, Cody left Michigan with his own family, living in Alabama for a few years, eventually returning to Northern Michigan so they could be near family and the life he missed here. Above all, Cody is remembered as a loving father, family member, and friend to all who knew him. Cody enjoyed being outdoors. He could often be found on the river, at a bonfire, or on the trails. He had a deep passion for cars- both driving and repairing them. Much of his time was spent off-roading with friends in the woods around Northern Michigan, a hobby he also loved sharing with his children. He was naturally mechanically inclined, self-taught, and exceptionally competent at rebuilding automotive and sound systems. From a young age, his children were often right there in the garage working on cars with Dad. Without question, Cody’s most fulfilling role in life was as a father to his three children, who he loved infinitely. Cody is survived by his children Anthony Downey, Austin Downey, and Tessa Downey, and mother of his children Kerry Reynolds; parents John Downey and Melanie Maylone, and stepmother’s Penny Moore and Tracy Johnson; siblings Thomas Downey, Kyra Kurz, Tasha Downey, Hailey Downey, Brett Maylone, Tyler Stroh, Connor Maylone, and Jaxson Maylone; grandparents Debbie Maylone, Lucy Downey, and Thomas Downey, great grandparents Beatrice Manville and Donald Maylone; and many loving aunts, uncles, nieces, nephews, cousins, and friends, all who will miss him dearly. He was preceded in death by Grandfather Scott Maylone and great grandparents Elmer Manville and Barbara Maylone. Cody touched everyone’s heart in a different way, forming unique connections with so many, all who are blessed to have been a part of his life along the way. Cody was hilarious, caring, insightful, smart, brave, personable, enthusiastic, and determined. Remembered as a man who when he wanted something he would do everything in his power to get it, and there would probably be a pretty great story to tell at the end of it all. He strived to be the best version of himself that he could be. His remarkable spirit and love will live on in the world. A Celebration of Life will be held in the spring, with information posted at a later date. Arrangements have been entrusted to Kalkaska Funeral Home.

The family of Cody D. Downey created this Life Tributes page to make it easy to share your memories.

Send flowers to the Downey family.