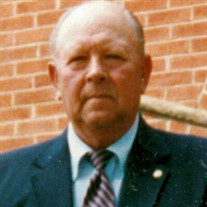 Clinton (Clint) F. Walter, 93, of Kalkaska passed away on April 14, 2019. Clint was born March 8, 1926 in Monroe, Michigan to Clinton and Dora (Krueger) Walter. He attended Monroe Public Schools graduating in 1943. He proudly served his country in the Navy during World War II from 1944 to 1946 in the South Pacific on the U.S. Grafton, PA.109. After the navy he joined his father and brother working at Toledo Scale Company. In 1949 he married Kathleen Lois Heck. During his time in Monroe, he was very active in baseball where he played in three leagues-Southern Michigan, Toledo Federation, and Monroe Twilight. He was also instrumental in organizing Custer Little League. In 1959 Clint accepted a position with Michigan Department of Natural Resources – Fire Division and moved with his family to Kalkaska. He retired in 1984 as Assistant Area Manager. Clinton was a member of St. Paul Lutheran Church and for many years very active including secretary, treasurer and building committee. Clint was an avid sports fan and outdoorsman loving fishing and hunting, especially bird hunting with his pal Chip the English Setter. He was active in sports in Kalkaska by umpiring high school baseball and adult softball. Clint worked tirelessly for the high school sports boosters and was instrumental in improving baseball and football facilities in the 1960’s and 70’s. Clint was always willing to serve his community. He was on the National Trout Festival Board for 14 years and president for four years. He was given the honor of Kalkaska Citizen of the Year 1971. Clinton was preceded in death by his parents, wife of 63 years Kathleen and daughter Susan Kay, and brother Raymond Walter. He is survived by his children Douglas and Laura (John) Latham of Kalkaska, grandson Jason (Becky) Walter of Livonia, great-grandson Wyatt Clint and sister-in-law Mary Walter. A visitation will take place from 4 – 7 pm on Friday, April 19 at Kalkaska Funeral Home. A funeral service will take place Saturday, April 20, 2019 at 2:00 PM at St. Paul Lutheran Church in Kalkaska Michigan. The family will receive friends beginning at 1:00 PM until the time of service. In lieu of flowers please make donations to the St. Paul Lutheran Church. Arrangements have been entrusted to Kalkaska Funeral Home.

The family of Clinton F. Walter created this Life Tributes page to make it easy to share your memories.

Send flowers to the Walter family.