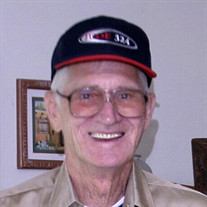 Clifford “Cliff” Allen Golden, age 86 passed away August 24, 2015. He was born in Kalkaska, Michigan on October 3, 1928 to Howard and Ethel (Ball) Golden. Clifford served in the United States Air Force from 1946-1949 with an honorably discharge. He was a member of the American Legion Post #0480. Clifford married Barbara Curry in 1954 and they were married for 57 years. Clifford was a farmer, trucker, builder, mechanic, and a man of many more trades. He was known for his unique “MacGyver” contraptions and hardworking ambition. He enjoyed having coffee with his son and daughter in law which turned in to long discussions about farming and fixing machinery. Whenever he could he was off on adventures with his granddaughter Cheri, traveling around northern Michigan with stories to last the day. He looked forward to trips to Tennessee to see grandson, Michael and the many projects he was working on. Him and his grandson, Dylan enjoyed ongoing conversations about politics when no one else would listen. His eyes would light up when the great grandkids would come in the door looking to have ice cream and cookies with him, it was always a treat enjoyed by all. He was an avid reader flipping through old papers, farm magazines, traveling, going to the casinos and having a good argument, “he was always right.” He loved taking a drive around the fields that have been in the family since 1893 to see what needed to be done next. He will be remembered as the man in his Dickie blues sometimes tan shirt/pant combo, with his favorite hat with a pen and paper in his pocket. Clifford is survived by his son, Brian and wife Patricia Golden; Grandchildren Cheri and husband Jeremy Wilkinson, Michael Golden and fiancé Kara Conrad, and Dylan Golden, Great Grandchildren Makenzie, Madison (aka Midget) and Hunter Wilkinson; Brothers, Gary and Melba Golden, Ronald and Gloria Golden, Kenneth and JoyceAnn Golden ; sisters, D. Joyce and the late Gene Tanner, B. Joan Hall, Marylou and Jesse Stuck; Special nieces, Debbie Bird (Dave) Swales and Rhonda Bird-Martin who were daughters to him; Brother-in-law Robert and Nina Curry ; Several nieces, nephews. Clifford was preceded in death by his wife Barbara, his parents Howard and Ethel(Ball) Golden; Brother Richard Golden; Nephews Larry and Kelly Golden; Father-in-law and Mother-in-law Arthur and Eva Curry; Brother-in-law Art Curry ; Sister-in-law’s Maxine “Mickey” TerHaar, Frances Davis Thayer and Ruth Ann Johnson. You are invited to share your memories as we celebrate Clifford’s life on Sunday, August 30th at the Moose Lodge, 2210 M-66 SW, Kalkaska from 1-4pm. Service will start at 1:30 followed by lunch. Arrangements entrusted to Kalkaska Funeral Home and Cremation Services.

The family of Clifford Allen Golden created this Life Tributes page to make it easy to share your memories.

Send flowers to the Golden family.