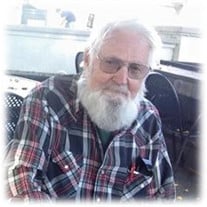 Clifford Frederick Afton (87) of Bear Lake Township, Kalkaska, Michigan passed away unexpectedly on Monday, January 20, 2020. Cliff was born on August 31, 1932 in Sparta Township, Kent County, Michigan. He was the youngest son of Courtney G. Afton and Ella Mae (Kenney) Afton. He is preceded in death by brother Harold and Richard and a sister, Aurelia (Earl) Bills. Surviving are his sisters Agnes (Robert) Rivett and Patricia (Paul) Thumser. He will be greatly missed by his children: Penny Sage, Clifford J., Jeffery (Kris) and Russell (Deb); grandchildren: Randy (Dana) Sage, Whitney ((Dan) Peters, Heather (Jake) Chapman, Cortney Afton, Nick (Lindsey), Phillip, Katherine, Michael and Elizabeth Afton; great-grandchildren; Lincoln, Eden Chapman, Anya Chapman, Charlotte (deceased) and Maggie and special friend Erica Mudry and his Eagles brothers. He had a special fondness for nieces and nephews and spent as much time as possible in their company. Cliff retired from Robinson Cartage Company of Grandville, Michigan after 40 years of heavy hauling but continued working as a pilot car driver for an additional 22 years. After 62 years and millions of miles he never tired of driving. In 1987 he was awarded a Million Mile Safety Award. He was known by other drivers as a king among pawns. His memory never failed as he remembered every load, every route and mileage between any cities. His favorite pastimes were traveling, camping, restoring old trucks and showing them and offering a helping hand when needed. Likely everyone who knew him was helped in some way by his kindness. Visitation will take place at Kalkaska Funeral Home and Cremation Services, 152 S. Cedar Street, Kalkaska, Michigan on Sunday, January 26 from 1-3 P.M. A celebration of life will follow at the Kalkaska Eagles, Aerie 4496 on M-72 east of Kalkaska, just west of the Manistee River. In lieu of flowers please donate and support the Kalkaska Eagles in their various charitable projects at 15854 W. M-72 Highway, Grayling, Michigan, 49738. Arrangements have been entrusted to the Kalkaska Funeral Home and Cremation Services.

The family of Clifford F. Afton created this Life Tributes page to make it easy to share your memories.

Send flowers to the Afton family.