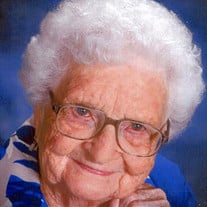 Christina ‘Jane’ Johnson was born July 25, 1919 in the South Boardman farmhouse built by her grandfather James Risk in the 1880’s. She passed away peacefully in the arms of her loved ones September 9, 2015. She is survived by daughter Norma Johnson Helbig (Herb) of Modesto, CA and by son Gary Johnson (Peggy) of Logansport, IN. as well as by 13 grandchildren, 20 great grandchildren, 21 great-great grandchildren. Also are the many step grand and great grand- children she warmly and lovingly welcomed into the family. She was preceded in death by husband Lloyd (1993), infant son Stanley (1944), son Larry (1995) and daughter Pat (2006). She spent most of her 96 years in South Boardman, where she was known and loved by many. She was an active member of the South Boardman United Methodist church, a charter member of the American Legion Auxiliary Gardner-Neihardt Unit 463 and the South Boardman Senior Citizens Center. She greatly enjoyed spending time playing cards with family and friends particularly Tonk Rum, Euchre and Chase the Ace. She was quite skilled as many of us who lost a pocketful of nickels will attest. She loved to travel and experience new things, wintering in Florida several winters with husband Lloyd and later traveling to Hawaii, California, British Columbia, Niagara Falls and Branson, MO. She enjoyed a festive 95th birthday party last summer attended by over 100 people. She lived independently in South Boardman until her final illness this past June. She died surrounded by family and friends. She lives on in the hearts of many. The family wishes to specially thank granddaughter Ardeith Larson, Steve Larson and great grandson James Larson for opening their home and providing loving care to Jane during her last weeks. We also thank the many loving relatives and friends who visited her during this time, providing light in a time of darkness. In lieu of flowers, donations may be made to South Boardman United Methodist Church, South Boardman Senior Citizens Center and/or the South Boardman American Legion Auxiliary Gardner-Neihardt Unit 463. Visitation will be from 5-8 pm on Sunday, September 13, 2015 at Kalkaska Funeral Home. A funeral service will be held at 11:00 am with final visitation beginning at 10 am, on Monday, September 14th in the Chapel of Kalkaska Funeral Home. Pastor Donald Buege will officiate the service. Burial will follow in Lodi Cemetery.

The family of Christina "Jane" Johnson created this Life Tributes page to make it easy to share your memories.

Send flowers to the Johnson family.