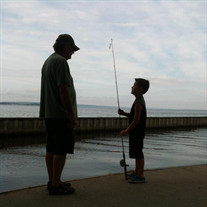 Charles “Chuck” Edward Michaels, 72, of Williamsburg, passed away at the Grand Traverse Pavilions on Thursday, June 9, 2016. He was born on August 17, 1943 in Iron County, to the late Joseph and June (Couney) Michaels. Chuck loved being outdoors from an early age. In his childhood he developed a love for being in the woods and began fulfilling this love through hunting. After receiving a Forestry degree from Michigan State University, he enjoyed a career in Forestry by first becoming a smoke jumper in Washington and later managing woodlands for Native American reservations, paper companies as well as individuals. The love for the outdoors also permeated to what he did after work. Earlier in life, he enjoyed skiing and ski jumping in addition to hunting deer and partridge. Later he trapped beaver, muskrat, fox and other animals. The finally of his hunting career ended with several trips to Canada hunting Moose in remote locations. His love for the outdoors permeated almost everything he did and was one of his core passions in the way he lived his life. He would often be concerned about, “who was managing the woods.” He was always a significant member of the communities that he lived in. In Newberry, MI he ran a logging show for the annual 4th of July festivities. He also helped to start a logging Museum that still operates today. He loved his family, especially his grandkids, and tried to be involved with them as much as he could. Chuck is survived by his wife Linda (George) Michaels; 2 sons, Matt (Cori) Michaels and Travis (Dawn) Michaels; 1 daughter Mandy Michaels; and 4 grandchildren, Lauren, Jonathan, Brady and Olivia; and 1 sister Marie (Larry) Lewis. Chuck was preceded in death by his parents. The family would like to thank the Grand Traverse Pavilions, the staff on Elm Wing were like family. Memorial contributions may be made in Chuck’s honor to the Lewy Body Dementia Association,www.LBDA.org/Donate. A Memorial Service will take place at the Kalkaska Funeral Home on Saturday June 25, 2016 at 1pm, a final gathering will begin at 12pm. Arrangements entrusted to Kalkaska Funeral Home and Cremation Services.

The family of Charles Edward Michaels created this Life Tributes page to make it easy to share your memories.

Send flowers to the Michaels family.