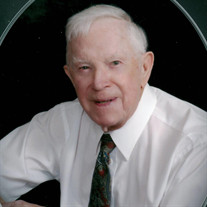 Charles George Clark, 89, of Kalkaska, passed away at Kalkaska Memorial Assisted Living on Thursday, August 10, 2017. Mr. Clark was born at home, during a snowstorm, in Gregory, Michigan to the late Charles and Margaret (Driver) Clark. He grew up in Pinckney, and at an early age started helping at his father’s Gas Station and Garage where they also had the local AAA wrecker service. Chuck entered the U.S. Army during World War II, where he served in the 27th Reg., 25th Div., “Tropic Lightning” in Okinawa and Hokkaido, Japan. He returned and continued his education at Western Michigan University. While there he earned 3 varsity letters in baseball, football, and golf. Chuck went on to earn his Master’s Degree from WMU. He married the love of his life Ruth Kennedy on September 9, 1950. Mr. Clark began teaching at Kalkaska High School in 1953, and continued his tenure until his retirement in 1992. During that time he was extremely active; from beginning the football and ski teams for the high school, to fighting for better conditions for Kalkaska teachers acting as chief negotiator, introduced UNIVAC II computer applications to his science class when only colleges had access in the 1960s, was a Finalist for Teacher’s in Space and was invited to attend the 2nd to last Challenger launch, and received Northern Michigan Teacher of the Year award. During the Vietnam War, Chuck was a Ham Radio operator, he would relay messages from soldiers to their families. He was always trying to learn, going back and obtaining a second Master’s Degree. Chuck had his pilot’s license and was a member of the Civil Air Patrol; he was also a member of the National Ski Patrol. Chuck and Ruth were founding members at St. Mary of the Woods Catholic Church, where they have attended, and Chuck was a member of the Knights of Columbus. In 2009, Chuck was inducted to the Kalkaska High School Alumni Hall of Fame. He was always honored to teach the students of Kalkaska. Chuck is survived by his wife, of nearly 67 years, Ruth; children: Charles L. (Marsha), Kevin J. (Karen), Timothy P. (Sharon), Gerald A. (Lori), and Joan Clark; Chuck was always particularly fond of all his daughter-in-law’s cooking; grandchildren: Brendan, Shane (Marie), Angella (Jed), Michael, Erin, Laura (Jonathan), Michael, Melissa (Zack), Jeff, David, and Cameron; great grandchildren: Conner, Addison, Ella, Keegan, Max, Axel, Lydia, and Ben; and siblings: Tom, Dennis, Francis, Anita, and brother-in-law Ray. He was preceded in death by his parents, sisters Mary and Elizabeth, and brother Jerry. A funeral mass will be held on at 11:00am, Wednesday, August 16, 2017 at St. Mary of the Woods Catholic Church; friends may gather beginning at 10:00am. Memorial contributions may be made in Mr. Clark’s honor to Kalkaska High School or Heartland Hospice. Arrangements entrusted to Kalkaska Funeral Home and Cremation Services.

Charles George Clark, 89, of Kalkaska, passed away at Kalkaska Memorial Assisted Living on Thursday, August 10, 2017. Mr. Clark was born at home, during a snowstorm, in Gregory, Michigan to the late Charles and Margaret (Driver) Clark. He grew... View Obituary & Service Information

The family of Charles George Clark created this Life Tributes page to make it easy to share your memories.

Charles George Clark, 89, of Kalkaska, passed away at Kalkaska...

Send flowers to the Clark family.