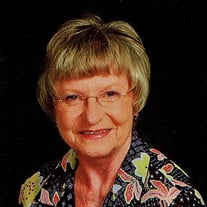 Carol Bloch Heintz, 79, of Kalkaska, passed away April 17, 2015 at home. It’s been said “Life on this earth is just a qualifier for life everlasting.” If so, you can bet your sweet bibby this gal qualified! A “Christmas Carol” blessed the lives of Hans and Hazel (Kizer) Bloch on December 19, 1935 in Morley Michigan, joining her sisters Shirlee and Barbara. Going with her parent/teachers, they moved for a short time to Hanover, Michigan, then on to Weidman where she spent some of her early elementary years. In 1944 the family moved to nearby Mt. Pleasant where she completed her education in the Mt. Pleasant school system, graduating in 1954. Later that same year she married Thomas Beltinck and that union produced seven children; Kelly, Kimberly, Kevin, Kerry, Kendall, Kurt and Karin. In 1985 she married Gerald Heintz in Kalkaska and two families were blended into one with Gerald’s children; Jerry, Lisa, Christine and Brian. That blended family subsequently turned into 10 children, 22 grandchildren and 20 great grandchildren. Carol retired from the Mt. Pleasant Regional Center in 1992 after nearly 30 years of service as a direct care aide. Enjoying her retirement she dedicated her time to family, friends and her flowers. Also she became what was known as “The greeting card queen” for which she will be sorely missed, not only by family and friends, but also the U.S. Postal Service! In 2002 Carol and Gerald moved to Kalkaska to their “rustic” cabin. That same year a pole barn materialized for storage of their belongings and a hunting cabin became “home” until the next year when they built the modern side of their “blue collar” estate. Though never a social butterfly, Carol was always a faithful friend to all who knew her; associates and family. Quiet and humble in faith, very generous and giving would very well describe Carol’s nature. Our Lord Jesus, grandchildren, family, friends and of course her cats and flowers were the order of importance to her. There was no valiant fight against her disease, but she emerged the victor because her cancer will be in the ground and she will be with our Heavenly Father. She is survived by her loving and adoring husband Gerald, children Kelly (Colleen) Beltinck, Kimberly Jaunese, Kevin (Connie) Beltinck, Kerry (Sandra) Beltinck, Kendall (Jeannette) Beltinck, and Karin Banks. Step Children Jerry Heintz, Lisa Heintz, Christine (Jeff) Siegel and Brian (Jessica) Heintz. Also surviving are her many grandchildren, great grandchildren, sister Shirlee (Sebe) Morgan, brother in laws Don (Lola) Nelson, Tony (Gerry) Heintz and sister in law MaryLou (Ron) Kriesche and numerous nieces and nephews. Carol was preceded in death by her parents, infant son Kurt and sister Barbara Nelson. Carol belonged to St. Mary of the Woods Catholic Church in Kalkaska and Sacred Heart Catholic Church in Mt. Pleasant. In lieu of flowers please allow your gifts to reflect this. Visitation will be held on Monday, April 20, 2015 from 2:00pm-4:00pm and 6:00pm-8:00pm, with a prayer service at 7:00pm, at the Kalkaska Funeral Home. A funeral mass will take place at St. Mary of the Woods Catholic Church in Kalkaska on Tuesday, April 21, 2015 at 11:00am, final visitation at 10:00am. A luncheon will follow. Burial will be at 12:00pm on Wednesday, April 22, 2015 at the Calvary Cemetery - Sacred Heart Parish in Mt. Pleasant. The family wishes to express a special thank you to Father Norm and all the friends and fellow parishioners; and a heartfelt praise to Dr. Lee Warnaar, Jen Hoxie, and all the staff of Munson Hospice. Arrangements entrusted to Kalkaska Funeral Home and Cremation Services.

The family of Carol Bloch Heintz created this Life Tributes page to make it easy to share your memories.

Send flowers to the Heintz family.