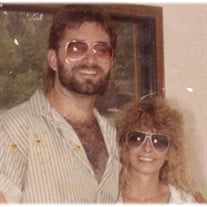 Brian William Curry, 56, of Kalkaska, Michigan passed away along with his wife, Sheryl Renee Curry (Ramey) of 38 years, on January 23, 2020, at their home. Brian William Curry was born February 4, 1963 at Seaway Hospital. He grew up in Rockwood, MI where he attended Monroe Catholic Central until the family moved to Florida where he continued his education at Clearwater Catholic. The family relocated to Baton Rouge, LA where he graduated from high school and met his wife. They were married July 25, 1981. Brian was very active in sports. He enjoyed participating in football, basketball and baseball. In basketball he competed in the Junior Pro Basketball Tournament in Crestview, FL. But his very favorite sport was baseball which he played all through his school days and adult life. During his younger school years in Rockwood, he spent his summer vacations at Devine Word Camp where he learned many things from arts & crafts to horseback riding. In 2001 Brian and Sherry opened their Burl Art business. Brian began working in wood at Traverse Bay Woolen in Mackinaw City, MI under the expert tutelage of world-renown Burl Artist Matt Madsen of Northern California. Brian specialized in freeform artistry, utilizing twisted Juniper, Redwood, Buckeye, Manzanita, Lodgepole Pine and Spalted Maple burls. They developed a considerable local following for their burl lamps, grandfather clocks of twisted Juniper and Manzanita. Brian and Sherry always had a great love for animals. They raised a large family of goats. Many were born on their farm and some were rescued. They also had horses, a mule, cats, dogs, birds and rabbits. Sherry had a horse rescue on Facebook and was very active in saving horses. Brian is survived by his mother Mary Oddy Ridout (Molly) of Houghton Lake, MI, his daughter Molly (Romaine) Watts, son-in-law Jay Watts and two grandsons James and Owen Watts. He is also survived by his aunt and uncle George (Bill) and Joan Oddy of Belleville, MI, cousins Mark Oddy, Matthew Oddy, Monica Duda, Trevor Holloway and five great-cousins. Mass for Brian and Sherry will be held at 12:00pm on July 25, 2020 at St. Ignatius Loyola Catholic Church. They will be laid to rest in St. Ignatius Cemetery in St. Ignace, following the mass. An urn for Brian and Sherry has been designed, handcrafted, and donated by Woodland Creek of Kalkaska. Arrangements have been entrusted to the Kalkaska Funeral Home and Cremation Services.

Brian William Curry, 56, of Kalkaska, Michigan passed away along with his wife, Sheryl Renee Curry (Ramey) of 38 years, on January 23, 2020, at their home. Brian William Curry was born February 4, 1963 at Seaway Hospital. He grew up in Rockwood,... View Obituary & Service Information

The family of Brian W. Curry created this Life Tributes page to make it easy to share your memories.

Brian William Curry, 56, of Kalkaska, Michigan passed away along...

Send flowers to the Curry family.