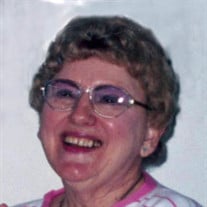 Annabelle “Ann” Jean Woodruff, 88 of Rapid City passed away on Sunday, December 9, 2018. She was born to the late Ray and Lena (Turk) Harrington on March 15, 1930 in Bellaire. She was one of 12 children and attended Alden and Elk Rapids Schools where she graduated in 1948. She married Bill Morrison and together they had two children Linda and Alan Morrison. She and Bill owned a floral shop and greenhouses for 20 years. Ann married the love of her life Jim Woodruff on September 15 1973. She and Jim ran the Senior Citizen lunch in Rapid City from 1994 to 2010 where she met so many wonderful people and made so many friends. They also ran the Thursday night euchre and card games at the Little Red School house where they had so much fun. Family and friends were most important to this very special lady, who had a heart of gold and the warmest smile that will be truly missed. Ann will be lovingly remembered by her husband Jim, stepchildren; Connie Velez, Penny (David) Clark, Billie Jo Ashworth, Thomas (Linda) Woodruff, Lynn Woodruff, grandchildren; Andy, Stacy, Tracy and Sean Woodruff, Blake and Michael Waycaster, Britney Ashworth, Tony Velez, Monica Clemens, Veronica Velez, Erica and Jamie Woodruff, 18 great grandchildren, siblings; Dorrie Morrison, Shirley Grody, Dawn Hebden and Georgeann Kosiara, sisters in law; Marge Chapman and Verna Morrison, and a special friend Evelyn Champney whom she loved as a daughter. She was preceded in death by her parents, children Linda and Alan Morrison, stepson Terry Woodruff; siblings: Wanetta James, Wanda Sisler, Helen Coatta, Evy Edwards, Ray Harrington, Freda Harrington, Ross Harrington, brother and sisters in law; Donna and Clark Champney, Marrian and John Brinegar, Louise and Charles Dillenbeck, Leon Chapman. A celebration of Ann’s life will be held Sunday, December 16, 2018 at the Clearwater Township Hall in Rapid City from 12:00 PM to 6:00 PM. Arrangements have been entrusted to the Kalkaska Funeral Home and Cremation Services.

The family of Annabelle J Woodruff created this Life Tributes page to make it easy to share your memories.

Annabelle “Ann” Jean Woodruff, 88 of Rapid City passed away on...

Send flowers to the Woodruff family.